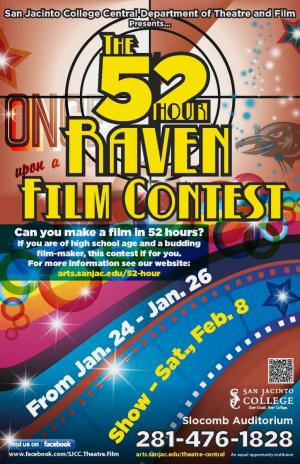 The 52 Hour Raven Film Contest is a “make a film in a weekend” competition designed specifically for the Greater Houston Area High School students. Founded in 2013 by the new film department at San Jacinto College Central, the contest was envisioned as a fun way to bring top student film makers from around the Greater Houston Area together to learn from and experience the work of their peers.

During the weekend of the event, every team will receive the same prompt (see the prompt link below) detailing the genre, a prop and some lines of dialogue. Each of these elements is required in a completed film. You and your team then have from Friday until Sunday Night, to create a dynamic short film. All creation must occur within the competition period: writing, rehearsing, shooting, editing, graphics, etc.

The Competition is held in January, and participating schools are encouraged to open their video editing labs to students on the Sunday of the Event. Showings of the completed films will be held within two to three weeks after the filming weekend at the campus of San Jacinto College Central Department of Theatre and Film.

**Note: The top film is not eligible to win multiple awards but will have received the highest overall score.

For more information, or to register, click the appropriate link below!!

Department of Theatre and Film

Department of Theatre and Film (Communications)

No new posts at this time

Teams will be listed as registration begins

List will be announced in January, as they are submitted on Sunday evening.

Award winning films will be announced in Feb. 2014, following the Awards Ceremony.