This is an informational announcement for ALL STUDENTS, EMPLOYEES and CONTRACTORS. 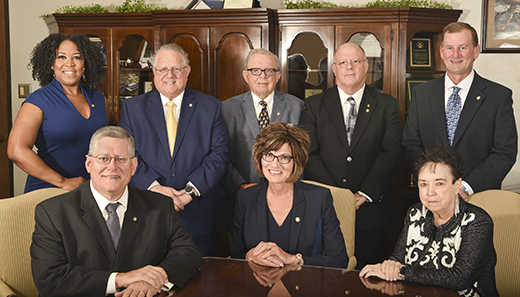 Request Form for Speaking Before The Board of Trustees

Board of Trustees Bylaws

Mandi Reiland, Manager, Executive Operations for the Chancellor and Board of Trustees
Phone: 281-998-6100
Email: Mandi.Reiland@sjcd.edu

Marie Flickinger was the first woman elected to the San Jacinto College Board of Trustees. She was elected to Position 3 in 1995 and currently serves as Chair of the Board. Mrs. Flickinger is a former Chair of the Building Committee and is a champion for the student success agenda with the Board, College, and the community.

In the Fall of 2013, Mrs. Flickinger earned the Association of Community College Trustees (ACCT) M. Dale Ensign Trustee Leadership Award as the national community college trustee of the year because of her positive impact and influence on student success at San Jacinto College. She is a strong advocate for community colleges and higher education and has played a major role in many different initiatives at San Jacinto College.

Mrs. Flickinger has served on two Mayoral Transition Committees for the City of Houston and is the Environmental Protection Agency community representative for the Brio Superfund Site, located in the South Belt area. She has also served on the Superintendent Advisory Board and the Superintendent Search Committee for the Pasadena Independent School District and is a recipient of the Rotary “Paul Harris” Award.

Mrs. Flickinger and her husband, David, are parents of two grown sons, Fred and Davy. The Marie Spence Flickinger Fine Arts building on South Campus is named in her honor.

John Moon Jr. currently serves as the Vice Chair and was elected to the San Jacinto College Board of Trustees Position 5 on May 9, 2009. Moon is no stranger to the College, and he attended San Jac upon graduation from Sam Rayburn High School. Moon went on to receive a Bachelor of Business Administration from Southern Methodist University and a Master of Science from the University of Houston – Clear Lake.

Mr. Moon is a licensed Real Estate agent, a life-long resident of the area, and after 30 years in banking, is focused on commercial real estate and investments. He has served as adjunct professor at San Jacinto College and is a Certified Public Accountant.

Keith Sinor is a Pasadena native and Deer Park resident and graduated from Sam Rayburn High School. He is a former San Jacinto College student who went on to attend Texas A&M University, where he earned a bachelor’s degree in accounting and finance, as well as an MBA. He is also a certified public accountant. After a two-year stint in public accounting with Arthur Andersen, Mr. Sinor joined Sinor Engine Company, Inc., where he was previously a co-owner and chief financial officer.

Mr. Sinor is actively involved in the community, previously serving on boards of the Deer Park Rotary Club and Deer Park Chamber of Commerce. In June 2011, he filled the remaining four years of Position 7, previously held by Mr. Wayne Slovacek.

Erica Davis Rouse, born in Galena Park, Texas, moved to the Southbelt-area as a child and has continued to make Southbelt where she raised her own family. Erica has always had a passion for community and education. Her parents lived and still live a lifestyle that modeled service and giving. Her mom, Gloria Davis, is a Galena Park ISD and Pasadena ISD retired teacher and counselor. Her dad and stepmother, Gwen Davis are retired Postmasters having worked from Kemah to Humble. In her former role as a manager for John Wiley & Sons, Erica is vividly familiar with the challenges faced by students and faculty in the 2-year college environment. She previously worked as a Regional Manager with School Innovations & Achievement, which provides software in the K-12 market. She has volunteered with several non-profits including Making it Better Texas.org, Yellowstone Academy, and she is an advisory Board member for the Smahrt Girl Foundation. Erica has also volunteered with Pasadena ISD, including service as Team mom for several of her son's activities, mentoring and coaching in the Leaders of Tomorrow program, tutoring at New Covenant church, as well as serving in various leadership capacities throughout the community. She is also proud to be an Ambassador for the Houston Texans as a member of the NFL alumni association.

"Service starts locally, I am thrilled to represent our entire community as a Trustee on the San Jacinto College District Board of Trustees, our community colleges are core to creating solid communities!"

Dan Mims has helped guide San Jacinto College for more than a decade in various leadership roles on the Board of Trustees. Mr. Mims also serves as Chair of the Building Committee and served as Board Chair from 2013 – 2017.

Larry Wilson was first elected to the San Jacinto College Board of Trustees in May 2007. He has worked in the Pasadena and East Harris County area since 1965. Mr. Wilson has been an attorney for 48 years, currently serves as a Deer Park Municipal Judge, and has served on the Pasadena City Council and as an East Harris County Justice of the Peace. In the 1970s, Mr. Wilson was an adjunct professor at San Jacinto College, teaching business law and economics.

Mr. Wilson’s wife, Carol, is a wedding coordinator. Their daughter, Cari, is a municipal prosecutor, and the couple's son Ty is an attorney in Hilton Head, South Carolina.

Mr. Wilson and his wife, Carol, have been married for 52 years and are members of the First Methodist Church of Pasadena.

Dr. Ruede Wheeler has served on the Board since 1986 and chairs the San Jacinto College Finance Committee. He joined the Board following nine years of service on the Board of Trustees for the La Porte Independent School District.

Dr. Wheeler practiced dentistry in La Porte for more than 40 years and is currently retired from dentistry. Dr. Wheeler currently owns and operates Wheelstone Auto Sales in La Porte. He is a member and past president of the La Porte Rotary Club.

The technical building on North Campus is named in his honor.

Ben Meador joined the board after the passing of Dr. Parker Williams in August 2004. The Pasadena native and businessman founded Meador Staffing Services in 1968 and currently serves as president and CEO.

Meador was a founding member of the San Jacinto College Foundation and was vice chairman of the Board of Directors in 2002. He was a member of the Chancellor Search Committee in 1995-96 and chaired the same committee in 2003. He also participated in a Resume Fraud Seminar, which was nationally publicized and sponsored by the College. As a trustee, he served as chairman of the board's Policy Committee, a member of both the Continuing Education Advisory and Business Education Advisory committees and made numerous presentations to San Jac business classes.

Meador has been a Pasadena Rotarian since 1974 and is a member of the Precinct 8 Harris County advisory board, appointed by Constable Bill Bailey. He retired from the board in May 2011.

Pasadena businessman J.D. Bruce was a board member for nearly 30 years and held numerous leadership positions, including chairman and vice-chairman. He joined the board in 1981 bringing 15 years of experience on the Pasadena ISD Board of Trustees, where he served in all capacities including chairman.

He owned and operated J.D. Bruce Insurance in Pasadena until he retired. His work in the insurance industry earned him much recognition, including membership in the Millionaire Club since 1978. Bruce has also been an active member of the Pasadena Chamber of Commerce since 1965, chairing committees on government affairs and state government.

The J.D. Bruce Student Center on South Campus is named in his honor.

A life-long resident of Deer Park and Pasadena, Brad Hance is a graduate of Deer Park High School. He attended San Jacinto College and went on to the University of Houston, where he earned a bachelor’s degree in mathematics. He then went to work for Maintenance Engineering Corporation in 1971, and in 2003, bought the chemical division and named it MECO Inc., Maintenance Engineering Water Treatment. Mr. Hance currently serves as the company’s president and CEO.

He and his wife, Evelyn, have four children and ten grandchildren. He has served on the Board of Directors for the San Jacinto College Foundation since 2007, and was that organization’s board chairman in 2010 and 2011. He is also treasurer of Second Century Corporation of Pasadena, a non-profit organization for community development.

The late C. Wayne Slovacek joined the board in 1972 and was a former chairman.

In 1988 he retired from Union Equity after 44 years, where he last served as vice president of port operations. Mr. Slovacek worked tirelessly on behalf of San Jacinto College. He served as president of the Texas Association of Community College Trustees and Administrators, and was a founding member of the San Jacinto College Foundation Board of Directors and served as chairman of its annual golf tournament, the foundation’s major fundraising activity. He also chaired the Building Committee.

Slovacek served as president of several area organizations including the Deer Park Chamber of Commerce, which instituted the Wayne Slovacek Humanitarian Award in his honor. He was a past president of the Deer Park Rotary Club and held leadership positions with the Port Safety and Advisory Council of Houston, the Southeast Harris County Economic Development Council and the Rehabilitation Foundation of Southeast Harris County.

The student center on North Campus is named in his honor. He retired from the board in Dec. 2010.

The late W.L. “Levi” Smallwood served on the board from 1977 to 2007, but his commitment went back even further. He was a member of the original steering committee for San Jacinto College, helping to gain support for its formation in 1960. After serving the board for 30 years, Smallwood retired and was named emeritus.

A former board chairman, Smallwood also chaired the Building Committee. He was a founding member of the San Jacinto College Foundation Board of Directors. He also served on the Pasadena ISD Board of Trustees for 13 years.

Smallwood was the 1995 Trustee of the Year for the Western Region of the Association of Community College Trustees and served as Texas state chairman for the organization. His civic activities included the Pasadena Rotary Club, the American Heart Association, the Boy Scouts of America and the Pasadena Rodeo Association.

Smallwood spent 44 years in the engineering department at ARCO. He also served 27 years with the volunteer Pasadena Fire Department, including as chief.

The health and physical education building on the South Campus is named in his honor.

Mandi Reiland, Manager, Executive Operations for the Chancellor and Board of Trustees
Phone: 281-998-6100
Email: Mandi.Reiland@sjcd.edu