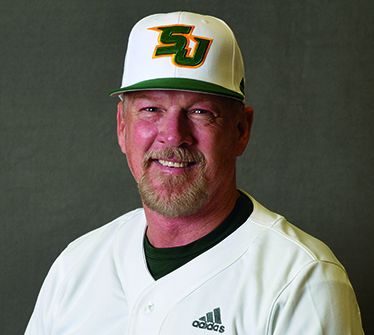 Leading the baseball program at San Jacinto College means more than performing a job for Tom Arrington. The way he sees it, he has an obligation to both the College and his players to help them continue their development and extend their playing career. So far, so good for Arrington, who took over the San Jac program as head coach prior to the 2001 season. Since then, the College has made 11 trips to the National Junior College Athletic Association (NJCAA) JUCO World Series, including six appearances in the national title game, culminating as the national runner-up in 2003, 2004, 2010, 2012, 2016, and 2017. His 40 wins at the JUCO World Series is an all-time record, as is his 64 total games at the prestigious national tournament. Arrington can also add “Hall of Fame” to his signature, as the veteran coach entered the NJCAA Baseball Hall of Fame in 2018.

Last season, Arrington led the Gators to a 21-6 season; 11-0 in the conference before the College and NJCAA made the announcement to cancel the season due to the COVID-19 pandemic.

In 2019, Arrington guided the Gators to a 42-12 season record. Though the Gators dominated their conference opponents, they were unable to continue to post season due to NJCAA sanctions. The Gators did however have a great season, which was highlighted by the Major League Baseball draft of Jackson Rutledge in the first round by the Washington Nationals.

In 2018, Arrington again guided the Gators to the JUCO World Series, where the team advanced to the semifinals and finished 3-2 at the national tournament. In a season in which seven players were selected in the MLB draft, San Jac went 53-14 under Arrington’s guidance. He was again named Region XIV Coach of the Year, and 13 players earned Region XIV South All-conference honors.

The 2016 season saw Arrington’s squad make another run for a national title, falling short to Yavapai College in the final game of the 2016 JUCO World Series. Three San Jac players were named to the JUCO World Series All-Tournament Team – catcher Baine Schoenvogel, pitcher Devin Smeltzer, and designated hitter Ryan January; and seven players were selected in the MLB first-year player draft. San Jac finished the season as the Region XIV South Zone champion, the undefeated Region XIV champions, and national runner-up, with an overall record of 52-12 and 31-9 in conference play. Arrington, in his 15th year as head coach, was named the Region XIV Coach of the Year for the 11th time.

In 2015, San Jac recorded a 43-21 overall record, returning to the JUCO World Series for the 23rd time in school history. Riley Smith was selected in the 31st round of the MLB first-year player draft, eight players earned post-season honors, 10 players were selected to participate in the Texas / New Mexico All-Star game, and a record 16 student-athletes signed national letters of intent to continue their education and baseball careers at four-year universities.

The year 2014 produced a 30-win season for San Jac as the team went 32-28 overall and 20-20 in conference play. Five players earned postseason awards, led by Josh Palacios and Matt Eureste, who were named to the all-Region XIV team. In addition, Toller Boardman, Austin Homan, and Josh Croft earned a spot on the all-conference team. In June, six players were selected in the 2014 MLB first-year player draft.

Arrington’s 2012 season was another 40-win season for San Jacinto College, as it went 41-27 on the way to a national runner-up, the second in three years. Arrington earned his 500th career win in a 3-0 win over Blinn College on Feb. 18. Starting pitcher A.J. Glasshof hurled a complete game no-hitter, the first nine inning no-hitter in the College’s history. Six players were named to the all-conference team, and for a fourth consecutive year, Arrington was named the South Zone Coach of the Year. The team shut out the defending JUCO champions Navarro College 1-0 in the final game of the regional tournament to earn a record 22nd trip to the national tournament.

The 2011 season ended earlier than Arrington would have liked, but the success of his team and players can’t be overlooked. It was another 40-win season (40-16) for San Jac, six players were drafted in the MLB first-year player draft, and the pitching duo of Tyler Wright and Miguel Pena went 20-4 overall, earning All-America honors.

The 2010 season was one of the most successful under Arrington. He guided San Jac to an unprecedented 21st trip to the NJCAA World Series, finishing as the national runner-up. Four players were named to the all-tournament team in Grand Junction, three earned postseason honors, and nine were selected in the MLB first-year player draft. San Jac’s appearance in the national championship game was the 12th in program history, and the national runner-up finish was the seventh. San Jac finished the season with a 52-12 overall record.

The year 2009 was a successful season, despite not having a home field to play on due to construction at J.R. Harrison Field. Nine baseball student athletes were named to the all-conference team, and Arrington was tabbed as the conference coach of the year. Deric Hawkins and Tommy Collier earned NJCAA All-American honors in leading San Jac to a 45-11 record, the conference title, and a tie for fourth at the World Series.

In 2008, Arrington led San Jac to a 44-14 record and saw two of his players drafted in the majors. San Jac advanced to the semifinals of the Region XIV tournament, just shy of a return trip to the JUCO World Series.

In 2007, Arrington guided San Jac to a 46-16 record, complete with another conference crown, Region XIV tournament title, and a third-place finish at the World Series. Along the way, Arrington surpassed the 300-win mark as head coach at San Jacinto College. In his first six years as head coach (2001-2006), Arrington was 264-102.

While the national title has proven elusive to San Jac under Arrington’s tutelage, Arrington and his staff have helped more than 150 players find homes at collegiate institutions and over 70 at the professional level. For him, it’s all part of his obligation as the team’s leader.

“It’s extremely gratifying to have quality athletes come in here and help us be what we believe is the premier junior college program in the country,” Arrington said. “They are getting a quality education, and at the same time they are continuing to develop and showcase their skills to a point where they either move on to the Division I level on scholarship or sign professional contracts for large signing bonuses. I think we accomplish those three goals, including the education, as well as anyone else in the nation.”

Arrington is confident the day will come when the national trophy again comes home to Houston. It will take skill, desire, and some luck, but Arrington is committed to ensuring that current and future San Jac players are in a great position to succeed.

“We have that desire to sustain our performance on the field, and with that hopefully comes a dominance of the region,” Arrington said. “With nine trips (to the national tournament) in 15 years, I think we’re doing that. That highly coveted first national championship for this group of coaches and the players is still in our sights. When it’s our year, it will be our year. I also believe that when we win one, we may win several after that. Our time is coming.”

With Arrington’s intense focus on the prize, there’s no reason to doubt his confidence. As a player, he was intent on becoming the best he could be.

Arrington began his coaching career in 1991 at the College of Mateo. Later came stops at San Francisco State University and College of Marin. In 2000, Arrington arrived in Houston as San Jac’s assistant coach, where he focused on the pitchers. He was named head coach nearly two seasons later and athletic director for the San Jacinto College North Campus in 2011.

“We look at our program as one of the best in the country,” Arrington said. “We also have an obligation to make sure these young men get the best education possible. That’s simply a personal belief of mine. We have to prepare these guys for lifelong success, not just baseball success. They have to be able to deal with success or failure on and off the field. We live in a demanding society, so we make sure our players are well prepared.”

The Mill Valley, Calif., native began his playing career at College of Marin, where he was an all-conference selection. He then played two years at Texas A&M University, where he earned two letters, was all-conference, and was named the Southwest Conference tournament MVP. He also earned the C.E. “Pat” Olsen MVP award.

Arrington played professionally for the Triple A team of the Texas Rangers; in Guadalajara, Mexico; for the Salt Lake Trappers; and the Single A farm team of the Montreal Expos.

Coach Arrington and his wife, Marya, have two children, Alden and Anya Lily.