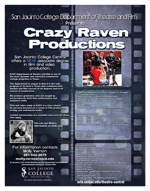 Starting in the Fall of 2011, SJCC Department of Theatre and Film will be offering video/film acting and production. A new Associates of Arts degree in film/video production will also be offered. This is a unique program, and the only one of its kind in Texas, a program that blends training in live Theatre and recorded media (film). Our students will now be able to direct, construct and/or perform in stage productions, as well as, write, produce and/or act in their own videos. In lieu of a fifth production in our season, a Departmental Film will be produced and entered into national and international film festivals.

Due to the increasing demand for film employment in the Houston area, SJCC has renovated their facilities to accommodate the need. The department has several new facilities, including an 874-square-foot production studio with four XL2 cameras, 5 HD cameras. clear-com communication, separate lighting grid, and blue screen. New video equipment is also housed in a separate control room, post-production room (with four G5 editing bays), and a 609-square-foot classroom (with electric screen and ceiling mounted projector). The 1,000-seat Slocomb Auditorium and the 175-seat Powell Theatre have also been re-designed to allow for conversion into back-up video/film studios.