Artist for Hope: A partnership of artistry and charity 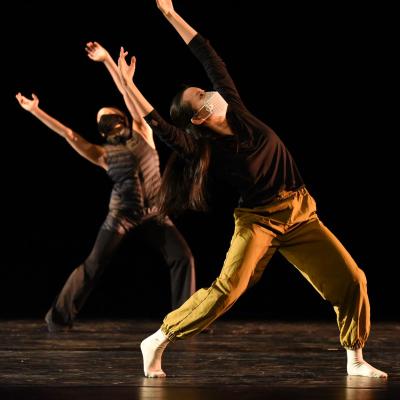 The San Jacinto College South Campus dance program celebrated its seventh annual Artists for Hope charity concert at the end of January. The event raised nearly $2,000 for the local homeless population through Hope for Houston.

Artists for Hope, the brainchild of dance instructor Jamie Williams, is an event she created because of personal loss and a desire to give back to the community.

“When I started teaching at the College full-time, my mother had just passed away,” said Williams. “Shortly after that, I found out a student and a colleague had family members diagnosed with cancer. I saw myself in these women, and it pulled at my heart.”

Determined not to “sit by quietly,” Williams began to research how she could give back through her unique position at the College.

“We found a company that would organize a charity concert, sourcing the dancers, venue, and studios,” she said. “I didn’t love the idea that someone from the outside would come in to do the work. I already had the contacts and the venue. I wanted to take it on myself.”

That first year, Williams was overwhelmed by the dance community’s response.

“I contacted 10 or 12 dance companies hoping someone would want to be involved,” she said. “All of them said yes. They were all ready and willing to donate their time and talents.”

“We try to choose a charity that is boots on the ground and in the community but could use more exposure,” said Williams. “Giving back financially is the main goal, but bringing awareness to a worthy cause is an added bonus.”

Class is in session

“We decided to offer these classes because it’s not always an option for our students and community to attend pricy workshops and concerts downtown,” said Williams. “By keeping the classes free, we are providing a service to our local dance community.”

“During the height of the pandemic, many dancers were creating dance films,” said Williams. “You couldn’t really have live performances, so we had to adjust and hone a new skill. It was one of the only ways to continue creating and sharing your work.”

The AFH International Dance Film Festival was born through this adjustment. Through a platform called Film Freeway, Williams and fellow instructor Jennifer Salter set their festival parameters and hoped for the best.
“We had 60 film submissions from 13 different countries the first year,” said Williams. “We didn’t intend for the festival to reach internationally, but we are so pleased it did.”

This year, the festival featured films from nine different artists from Canada, Germany, Italy, Latvia, Switzerland, and the U.S.

“We’re in a very unique position. Because the College owns the venue, we can donate 100 percent of the profits to charity,” said Williams. “The master class teachers are paid through the program budget, and the performers donate their time. We don’t take any part of the profit because we don’t need to.”

Williams sees the partnership between the AFH event and the Houston dance community as a win-win-win situation.

“It’s my favorite type of result,” she said. “The audience gets exposed not only to the San Jac dance program but also to some of the finest dance artistry Houston has to offer. The dance companies get to give back to a great cause, and we raise money for charity. We couldn’t have planned a better outcome.”