The San Jacinto College Central Campus Theatre marks a platinum anniversary this year with its annual production of “Santa’s Christmas Magic: The Musical.”

The production is a tradition for many families, whether audience members or performers.  For years, players young and old have returned to appear in the holiday favorite.

Dr. Jerry Ivins, department chair and artistic director for theatre and film, “didn’t know it would be continuing this long” when the play debuted in 2001.

“It’s a high-energy musical that includes acting, singing, and dancing,” Ivins said. “This will be our 26th year to present a Christmas show and 20th year for ‘Santa’s Christmas Magic.’ Nearly every performance has sold out since we introduced the production.”

The play originated at San Jac when the script and music students were set to perform in 2001 were back ordered.

“We didn’t have time to get rights to another play, and I told the students, ‘We may not be able to do a Christmas show,’” Ivins said. “They were visibly upset. I charged them to write their own play. It was our only option.”

The students returned the next day with a rough draft they titled “Santa vs. The Grinich.”

“The original script was a bit rough and only 10 pages long. It was a good start, but it needed finessing,” Ivins said.

“It was a basic script, but audiences loved it. Each year, we tweak the content just a bit based on who is in the play, what their abilities are, and a bit of pop culture influence,” said Ivins.

The play is a fantasy about a sinister plot to steal Santa’s magic. Highlights of the show include toys that come alive to dance and sing, a children’s elf chorus, and a fast-paced chase. Young viewers can also visit Santa Claus at intermission.

One family impacted by the Christmas show tradition are Anthony and Michelle Gutierrez. The high school sweethearts started attending the Central Campus theatre program in fall 2004 as an actor and theatre technician.

“We actually found out about the program because my mom played the Christmas mouse in one of the productions,” Michelle said. “Anthony and I were both involved in theatre in high school, and after meeting Doc [Ivins], it seemed like a good fit.”

In their first semester, Anthony played the pivotal role of the menacing Grinich, and Michelle helped build and paint sets. The following year, the couple welcomed their first daughter.

“We have photos of her on my lap with me in costume as Santa on set,” said Anthony. “The cast and Doc became like family. Some of my fellow classmates were the first to hold my daughter after she was born.”

Now a high school sophomore, the Gutierrezes’ oldest daughter and her younger sisters have been in the annual production every year since they were four.

“Last year with the play cancelled because of COVID, our girls were a bit lost at Christmas,” said Michelle. “Our Christmases have always revolved around rehearsals and learning the music while hanging decorations. They are very excited to get back to it this year.”

The production boasts more than 40 adult roles and a children’s elf chorus with 50 singers.

“It always tickles me because we do Shakespeare, Molière, and Arthur Miller -- Pulitzer Prize winning shows. But the one the students are most excited about is the Christmas show,” said Ivins. “They fight harder for this show than anything else.”

This year performances are set to open Dec. 2 at 7:30 p.m. and will run until Dec. 12 with seven total performances including two Sunday matinees at the San Jacinto College Central Campus fine arts building (C13). For more information, call 281-542-2039 or visit www.sanjac.edu/theatre-central. 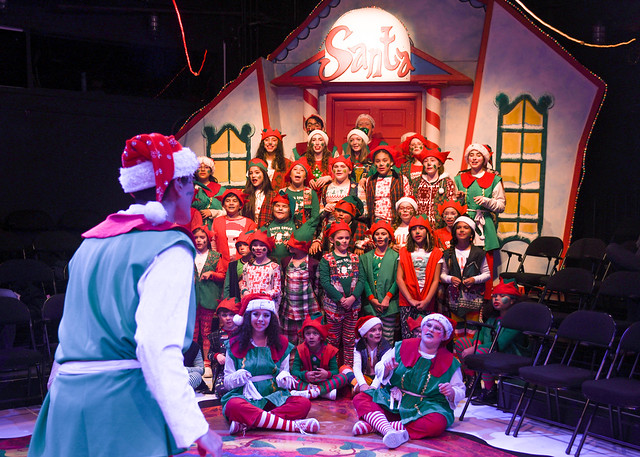