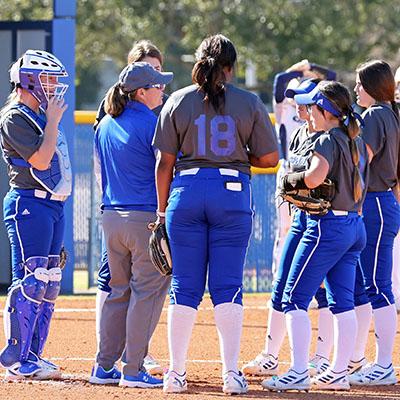 The San Jacinto College Coyotes polished off the first half of their season having won 11 straight games, including contests against national powers Iowa Western, Indian Hills Iowa and Navarro. The Coyotes outscored their opponents 72-17 in those games.

"It was a very good three-week period for us,” said Kelly Saenz, Coyote head coach. “Our ladies were very focused and have improved and developed tremendously during that stretch. We needed this heading into conference play next week. It is a testament to how hard they’ve worked.”

In the circle, the Coyotes are led by Christin Haygood (9-1) and Ronni Grofman (3-3). Haygood has been dominant in the zone having accumulated 61 strike outs to just 12 base on balls in 69 innings pitched. Grofman has 48 strike outs, however, she has walked a few more than Haygood with 25. Combined, the two have an overall record of 12-4 with 109 strike outs.

“Offensively, we have been quite balanced in our approach,” said Kelsey Walters, Coyote assistant coach. “With that being said, Taniece has led this team and has been outstanding. She hits in our four-hole, has 9 multi-hit games and is a leader among the team.”

The Coyotes look to carry the early season momentum into conference play. Conference home opener on March 18 is against Blinn, who has struggled up to this point with an overall record of 5-16.

“We won’t overlook anyone,” said Saenz. “Blinn’s record is not indicative of the talent level and tremendous coaching staff in Brenham. We’ll go into that series like they are the best team in America and we will have confidence in our two tremendous arms in Haygood and Grofman to give us a chance to win.”

To follow along with the San Jacinto College-South Coyotes, visit www.sanjac.edu/athletics or visit the team website directly at San Jac Softball. Listen to the games at tsrnsports.com.