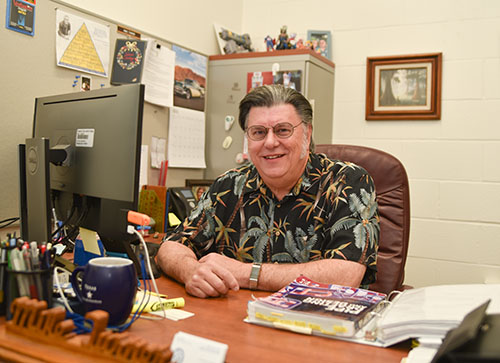 One family’s San Jacinto College journey began in the 1960s and has continued across four generations.

Mike Turner, engineering design graphics instructor at the North Campus, has been teaching at the College for six years, but his father started the trend. Known by most as Pete, Turner’s father taught at the Central Campus while holding a full-time job as an instrument technician at NASA.

“My father taught instrumentation as an adjunct in the 1960s,” Turner said. “I started attending here beginning in the fall of 1971, and two of my sons attended, one beginning in 1997, the other starting in 2004. My oldest grandson attended San Jac around five years ago.”

Turner originally wanted to be an English teacher. As a student, he was on the San Jac newspaper staff and enjoyed covering sports. He transferred to the University of Houston to study radio and television, but a new opportunity knocked, and he opened the door.

In high school, Turner had completed drafting classes and obtained field experience with an air conditioning company drafting house plans. He also had his father’s encouragement and expertise, so when an engineering company offered him a part-time, entry-level drafting job working in reproduction and blueprints, he embraced the chance. He eventually worked his way up to a full-time position and into a lifelong career.

Turner accepted the position in August 2016 and has never looked back.

“Among my favorite facets is sharing anecdotes about my years in the business and what they will experience in the working world,” Turner said. “I always tell my classes on the first day that we're going to learn a lot about drafting, some about the business, and a little about life."

Turner understands firsthand the path to self-discovery. He enjoys mentoring his students and encourages them to pursue the careers for which they have a zeal.

Turner’s eldest son, Stephen, graduated in 2002 with a degree in general studies. He then transferred to UH, majored in political science, and now works in the restaurant industry. His stepson Tyler graduated in 2008 in culinary arts and is working for a beverage distribution company. His grandson Blake majored in music at San Jac and currently manages music lessons for a local Guitar Center.

Life outside the dream job

Until about 12 years ago, Turner played bass guitar in a classic rock band as a hobby. Since then, he has devoted much of his time to​ 10 grandchildren, ages 8 to 25. He recently celebrated his 30th wedding anniversary. When he can find the time, he enjoys reading military history and biographies.

Turner is proud to be not only a lifelong Houston-area resident but also a sixth-generation native Texan, his maternal ancestors settling in Milam County in 1834. Two of his third great-grandfathers fought in the Texas army during the revolution, and one died in the massacre at Goliad in March 1836. Turner is a member of the Sons of the Republic of Texas because he descended from Texas revolutionaries.

What is the key to happiness?

“Do what you love, be content with what you have, and spend your time around people who like to laugh with you,” Turner said. “Someday may never come.”