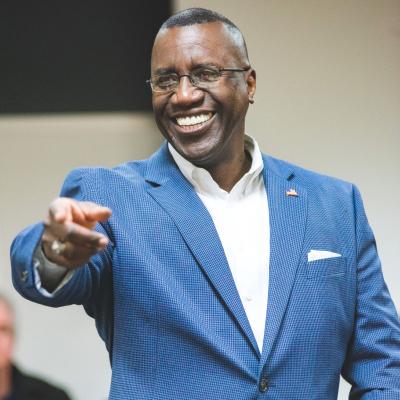 Dr. Lonnie L. Howard, college president of Lamar Institute of Technology, is an example of the American Dream.

“My version of the American Dream would never have become a reality without earning an associate degree from San Jac,” Howard said.

Born into abject poverty in a small shack without running water and placed in remedial classes, Howard defied the odds by becoming a first-generation high school and college graduate.

By way of a delayed enlistment in the U.S. Army at 17, Howard left for the military 10 days after graduating high school. Despite being promoted to the rank of sergeant and honorably discharged, Howard couldn’t find any jobs except as a janitor due to his limited education and civilian job skills.

“I had a desire to serve my country and college seemed out of reach for me,” he said.

All of that changed when Howard graduated in 1993 with an associate degree in welding technology from the San Jacinto College North Campus.

“That year will remain one of my most memorable,” he said. “My entire family was able to attend the commencement, which was held in the small North Campus gymnasium. I have never been so proud to hear my name called as I crossed the stage, and I saw my mother crying.”

Today, Howard’s degree from San Jac with its original cover is displayed in his office.

“I tell everyone who visits my office the inspiring story of my educational journey and how my associate degree not only helped me increase my workforce skills, but it also gave me the academic confidence to earn other degrees,” Howard said.

“Not too bad for a welding student,” he said, smiling.

Professionally, he has had rapid career progression within higher education -- from executive director for the UH School of Continuing and Professional Studies and president and CEO of Clover Park Technical College to the current president and CEO of Lamar Institute of Technology. In addition to his role at LIT, Howard is a sought-after speaker, having given nearly 100 national, state, and local presentations.

"With hard work, persistence, and integrity, anyone can achieve some measure of the American dream,” he said.  “What that looks like depends on someone's capacity and their level of investment and engagement. Regardless of socio-economic condition, it's never too late."

Howard’s ties with San Jac go beyond being an alumnus. He became a faculty member and eventually department chair for the welding technology program and continues to foster his relationship with the institution as a lifetime member of the alumni association and San Jacinto College Foundation donor.

“I owe a huge debt of gratitude to those past faculty and staff members who took a personal interest in helping me earn my degree,” he said. “This type of commitment to student success is even more emphasized today. I want to congratulate Chancellor Hellyer, the Board of Trustees, and the San Jac family on 60 wonderful years…and here’s to 60 more.”