McShay brings knowledge, experience and passion to the classroom 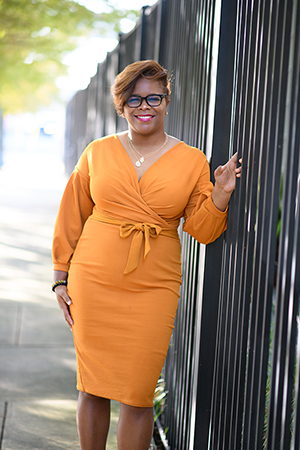 San Jacinto College government professor Juli McShay brings a myriad of experience in government, education, administration, and business to her classroom, passing her knowledge along to her students.

“I have worked in city and county government in different capacities, so I can take the textbook principles and give examples of how they apply,” said McShay. “My goal is to see those lightbulb moments in my students when they connect with the real world and start to become active citizens.”

“I gained so much knowledge and rich relationships at Talladega,” said McShay. “It is the epitome of a historically black college, and I’m so grateful for the education I received there.”

Texas Southern University called to McShay in 2005 to further her education and she earned her Master of Public Administration degree a year later. Soon after, she began her government career as a facilities planner for Polk County Schools in Bartow, Fla.

“I worked directly with the school superintendent and the facilities director to help determine where to plant new schools and when to update and refurbish school buildings,” said McShay. “We had to work with several different local jurisdictions, giving me experience working with different government entities.”

In 2008, McShay decided to pursue her law degree at Miles College in Alabama. Along with her move, she also started a new government job as a student attorney for the City of Birmingham, Alabama, mayor’s office.

“I learned so much about city codes and ordinances and helped bring the city up to date by digitizing the coding system,” said McShay. “In some instances, the only place some of the codes could be found was on thirty-year-old microfilm. I was so happy to be a part of that process; it was an invaluable work experience.”

McShay moved back to Houston six years ago to teach political science at her alma mater, TSU and as an adjunct at San Jacinto College. In 2018, McShay began teaching full-time at San Jac.

“It was a new experience for me working at San Jacinto College,” said McShay. “I had attended and worked at only historically black institutions. My students didn’t look like me anymore, but it is my goal to be honest and forthcoming while educating my students no matter the audience in terms of race, nationality, or gender as it relates to political science and government.”

“I’m so excited to get to work in my new capacity to elevate the NAACP Houston branch,” McShay said. “The organization is 110 years old and I want help us be even more forward facing. Our goal is to advocate and educate for the black community and I look forward to advancing our membership and volunteers.”

McShay credits two mentors for inspiring her to continue to work as hard as she does to educate the next generation of leaders.

“I met Dr. Angela Davis and Dr. Jane Elliott in 2018 at the University of Houston,” McShay said.  “I was able to spend time with them and soak up some one on one time. They shared with me that they were proud that I chose my work and that I’m committed to teaching future leaders about the constitution, equity, and race relations. When your heroes say they’re proud of you, it kinda makes you want to suit up with your own cape each day so you can continue to make them proud.”

What does the future hold for McShay in the next ten years?

“I plan to be a published author of at least three books and a national speaker at colleges, universities, and conferences,” McShay said. “I will still be a professor and perhaps even a co-author and contributor to a few textbooks. Basically, I plan to be a total rockstar in academia as it relates to social justice and liberation for all.”