As their final project last fall, San Jacinto College criminalistics students presented in front of a mock grand jury. The evidence spoke for itself as students showcased what they’d spent a semester learning.

In small groups, they presented crime scene photos, bullet trajectories, blood spatter analysis, and pertinent facts to the jury about their assigned cases.

“It is one of the best projects that we have ever done on the Central Campus,” Dr. Robyn Ring, criminal justice professor, said. “The mock grand jury members offer insight, support, and let the students know that they believe in what they are doing and learning.”

The grand jury volunteers included professors, the campus provost, education professionals, a department chair, and a Harris County deputy constable. Ring believes such an experience shows students “everyone at San Jac is interested in their education.”

It was both a presentation and interactive platform in which jury members posed questions about the case: How far was the victim from the shooter? How does the blood spatter indicate bullet direction? In what part of the building was the evidence found?

“This assignment prepares them to work extensive crime scenes, write reports, then make their case presentation to grand jury members or trial presentations,” Ring said. “This assignment is geared to help them understand the system and the importance of following the protocols to handle evidence and make assumptions of what the evidence indicates happened.” 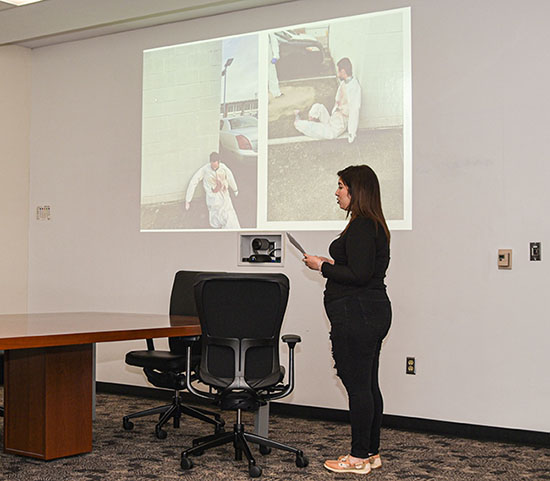 The criminalistics class is a hands-on, evidence- and lab-based learning experience that teaches students how to approach and think about a crime

scene. They use scientific protocols to identify and handle evidence, record and document a crime scene, and think critically about what the evidence indicates.

Students cover complex issues. For example, they studied decomposition by burying a dead animal to see what bugs it attracts and what that determines. They also participated in blood spatter and bullet trajectory labs.

Ring endeavors to show students that “a crime scene is more than photos and tape measures,” although those are important.

“We are always working to improve our equipment, and now I am working on getting a total laser scanner and perhaps a drone,” Ring said. “We want to give students a glimpse of what the world might look like in years to come.”

To prepare for crime investigation, students need a slew of skills. They get lots of help from faculty.

“Anna Cummings, who teaches drafting, spent a week showing them CAD so their drawings are more like what they would do in the workplace,” Ring said.

Criminal justice professor John White taught report writing, another relevant skill. Students also learn the administrative and business side to develop a well-rounded understanding of what they will be expected to do once hired.

“The crime scenes are thought out and planned so there is a logical conclusion,” Ring said. “We measure and set up the scenes. We want to know what the conclusion of the evidence should be before the students see it and work it.”

Faculty create some of the fake blood spatter in the spatter labs to incorporate into the scenes. Ring’s motto is “The evidence should tell the student what happened.” The crime scenes are made to speak a simple and plain language, “but if you don’t know how the evidence speaks, then you might miss what the evidence says.”

Students learn to translate the evidence. It doesn’t take a lot to believe that “people lie, evidence doesn’t.”

Every team has an appointed leader, similar to how police operate. Some leaders, however, emerge naturally and take on the authoritative role. The three team members divide the work, and discussion includes evidence, bullet trajectory, and blood. One person presents the findings to the mock grand jury, representing their teamwork in the case analysis. The other team members chime in as needed.

“There is an incredible amount of work for even these scenes where nobody’s life is balancing on the court outcomes,” said Ring. “But you might not be able to convince them of that. Hopefully, they feel the pressure of getting it right.”

To learn more about the criminal justice program, visit sanjac.edu/program/criminal-justice.