‘A Wish for Hope’ premieres at South Campus 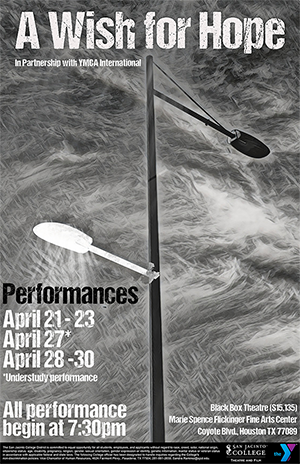 The San Jacinto College South Campus Theatre and Film Program will present an original work, “A Wish for Hope,” inspired by the experiences and positive spirit of refugees.

Partnering with YMCA International Services, a unique resettlement center of the YMCA of Greater Houston, students interviewed refugee clients from around the globe.

“Their stories are at times heartbreaking and hard to listen to, but with each person we interviewed, we discovered something inspiring,” said Frank Vela, program director, theatre and film.

Giving them a voice

Through networking, Vela met Susie Ventura, YMCA mentoring program director for refugee youth, and they began brainstorming how to connect the two institutions.

“I was interested in telling their stories and supporting them as they venture into a new community as refugees,” he said. “Working with Susie has been a great fit for both programs.”

Vela and Laura Grayson, the play’s director, sat down with six of Ventura’s clients, ages 17 to 24, to capture their experiences.

“We didn’t direct them on what to tell us,” Grayson said. “We just listened. We wanted to give them a public voice in a theatre production that would reflect who they are.”

After the interviews, Vela contacted playwright Gabriela Anez to craft a unique story inspired by these refugees. Anez, an American-Venezuelan screenwriter, director, producer, and actress, has placed as a quarterfinalist and semifinalist in international screenwriting competitions.

“I wanted to tell a story about humanity and empathy and connecting on that level,” she said. “The subjects have such life, and there is more to them than being a refugee. I wanted to touch on the reasons they left their homes and the unique struggles they have. The characters are relatable. They are real life.”

Ventura, a San Jac graduate with an associate degree in theatre and film, loved the idea of connecting her refugee clients with an institution she knew had a “great reputation and one they could thrive in, given the opportunity.”

“My role is to walk alongside our clients on their journey to becoming productive American citizens,” said Ventura. “We help them to learn, lead, and thrive with the support of trained volunteer mentors and through community partners that are willing to develop, explore, and create opportunities that are culturally sensitive and light-hearted. San Jac answered that call.”

Many of Ventura’s clients had just begun or were almost finishing their higher education journeys when they left their home countries.

“Unfortunately, when they arrive in America, they are often forced to start over not only in education but in every aspect,” said Ventura. “But research shows that it can take just one person who cares -- in this case, a mentor -- to restore hope, build stability, create opportunity, and change futures.”

The play focuses on six refugees who planned a workday for Harrison Recovery, a company that employs refugees to clean up a local, run-down park. However, a storm halts their efforts. Rather than burying their thoughts, they choose to share their heartwarming and encouraging stories, discovering the value of empathy and togetherness in the face of challenges.

“A Wish for Hope” opens at the Marie Spence Flickinger Fine Arts Center in the Black Box Theatre (S15.135). All performances are free and open to the public. For a complete list of performances, visit sanjac.edu/theatre-south.